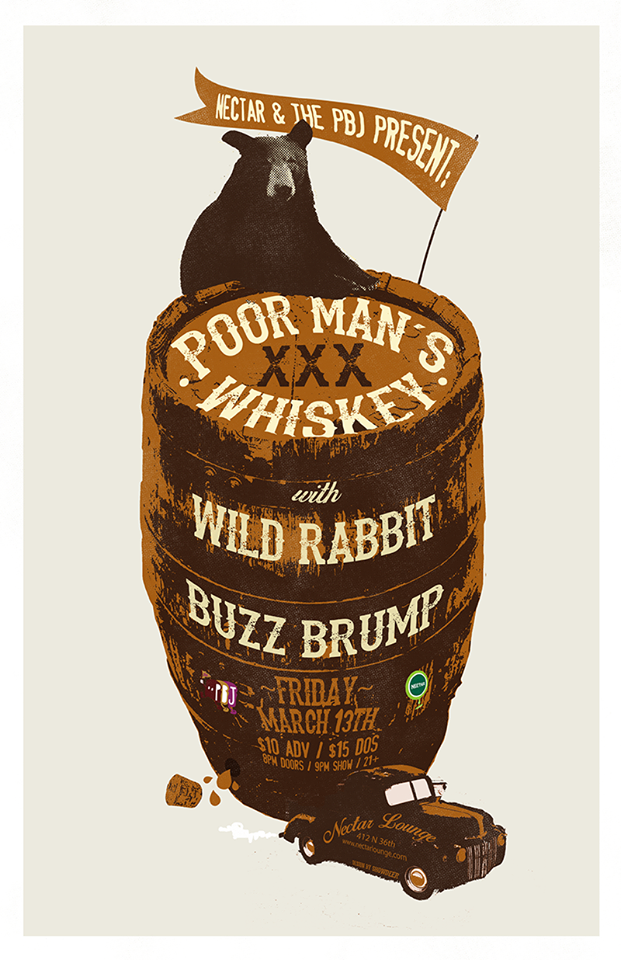 We return to the Nectar Lounge in Fremont on Friday the 13th with San Francisco’s Poor Man’s Whiskey and Bellingham, WA’s Wild Rabbit.

“In the end, they are an original distillation, a tasty burn that goes down with a kick and lingers beautifully when it hits your gut.”- Dennis Cook, Jambase.com

Emerging from the San Francisco bay area music scene this quintet has developed a sound that is eclectic and engaging. PMW has been winning over national audiences with their upbeat performances, zany stage antics, and infectious songs. While seamlessly integrating acoustic and electric instruments the band weaves tales of everyday life, inviting the audience to become a part of each show.

PMW has released three studio albums, “Train to California” (2003), “Roadside Attraction”(2005), and in 2009: “Dark Side of the Moonshine” (a double disk set featuring original music as well as the bluegrass interpretation of the Pink Floyd classic album).

Folk-stomp Americana from the Pacific NW

“If you like dancing, forest landscapes, adventures, Colorado, the PNW, harmonious vocals, love stories, early mornings, late nights, local produce, or strong coffee, you will love Wild Rabbit…This is art and entertainment in a beautiful form. The entire album is just flawless and I want everyone to enjoy it.”
-Ear To The Ground Music, Album Review by Kate Bee

Though all four members of Wild Rabbit (formerly Br’er Rabbit) grew up running around wooded areas of the same small town in the farthest Northwest corner of Washington state, brothers Zach and Nathan didn’t meet Miranda, the third founding member, until they had all ended up in New York City. This kind of backyard folk seasoned by the edge, polish and fervor of big-city inclinations is at the root of the style they call folk-stomp Americana. The group revamps classic string band instrumentation with homespun percussion and the unique integration of six-string ukulele and cello. With their widely varying influences, three distinct vocal styles and copious amounts of foot-stomping, they demonstrate a sound and presence that’s at once original and familiar, appealing to audiences of all generations and genres. Voted best band in their home city of Bellingham, WA for the past two years, they have quickly risen to local renown and now tour extensively throughout the U.S.